I recently had an enlightening phone conversation with Abner Kneitel’s daughter Betty, talking with her about her father and what little she knew about his animation career. During the call Betty dropped a critical bit of information - that Abner’s middle name was Matthew. At that point I had an epiphany. Were Abner Kneitel and Abner Matthews the same person?? Abner Kneitel had practically the same middle name as the last name of the other Abner working for the Fleischers at the same time and in the same crew. Betty then dropped another critical tidbit - Abner's mother had misspelled his middle name on the birth records – instead ‘Matthew’ she wrote ‘Mathew’. I instantly recalled one Popeye cartoon - ‘Leave Well Enough Alone’ - where the name is spelled incorrectly. That pivotal comment of Betty's made me think that the two Abners could have been the same animator.
I didn't want to believe there was no Abner Matthews. I also had a hard time believing that nepotism was not an accepted practice at the Fleischer Studio since the Fleischer family clearly practiced it. But there was still the mystery of why Seymour Kneitel and Abner Kneitel were never credited together on the screen considering Abner Kneitel's animation style is dominant in many of Seymour's cartoons - thereby qualifying him for a credit. It seems plausible that he may have used 'Matthews' as a pseudonym, because of possible nepotism restrictions, so he was eligible to get screen credit.
There's a part of this puzzle that doesn't work with my conjecture and that's the Matthews credit outside of the Kneitel crew. I can only speculate that as long as Abner was part of Seymour's crew, even if inherited and headed by William Henning (when Seymour was recovering from a heart attack), that he would continue using the Matthews pseudonym. 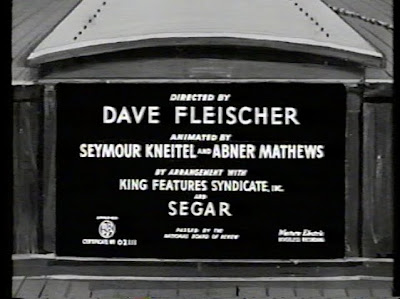 Credits for Leave Well Enough Alone with alternate spelling.
So what did happen to Abner Kneitel??
Abner served in the navy during WW2. After his discharge he decided to leave the animation business. Abner loved the Florida lifestyle and did not want to return to New York where the Famous Studio had relocated. For a while he operated a small gift shop then worked as an insurance salesman for Peninsula Life. Betty figures he regretted leaving the animation business - Abner became an alcoholic and in her words, he 'pickled himself to death'.
Following is a letter from business manager Sam Buchwald to Abner in response to his resignation. It's a bit fuzzy - taken from a photograph and the best quality that I have. 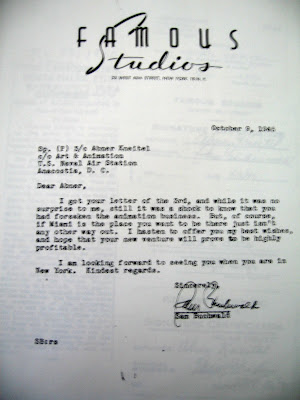 Click on image to enlarge
(Thanks to Renee for the photo)
A big thanks to Betty and her daughter Renee for their recollections of Abner.
Posted by Bob Jaques at 1:40 PM 8 comments: