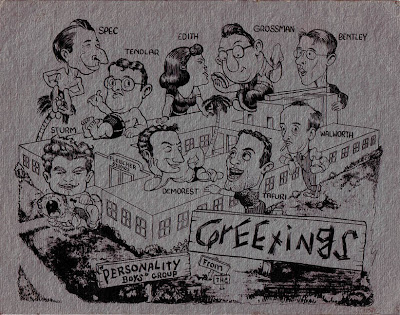 Scan of original card that was printed on textured paper
I don't know the reason for this card. One thing cool about it though - it tells us the members of the Tendlar crew when the Fleischer Studio moved to Miami. (sometime after March 1938) It may have been printed just after the move to Miami - I would place this card around the time that Aladdin and His Wonderful Lamp was being finished. My conjecture is based on the animators caricatured here. Shortly after Grossman would join Orestes Calpini's group of animators, and Spector and Bentley would likewise leave Tendlar's group to animate in other crews. There are a couple of Tendlar's animators missing from the greeting that predate the move - Tom Golden and Eli Brucker. Golden likely stayed in New York to finish up business there and followed later. Brucker seemed to disappear after the 1939 credits. I suspect he was one of the animators that didn't want to make the move to Miami.
Posted by Bob Jaques at 4:28 AM 1 comment: