Here's a splash page from a golden age comic. Not sure what one - it could be a 1950's issue of Frisky Animals. The comic story is part of a reprint compilation from a defunct publisher that was sold in the early 80's. The artist, Harold Abbey, was an inbetweener for the Fleischer Studio. I don't know much about him beyond that. (any readers from NYC know anything about him??)
OK Fleischer fanatics - notice anything familiar about the characters on this comic page?? 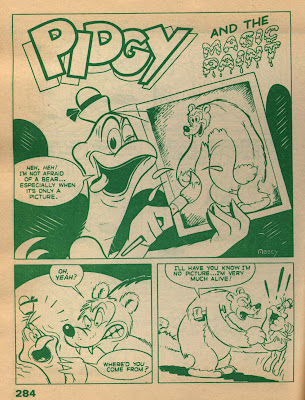 (click on image to enlarge)
Correct - (I'm assuming you all got the answer) Pidgy is clearly a knock-off of Twinkletoes - the carrier pigeon from Gulliver's Travels. 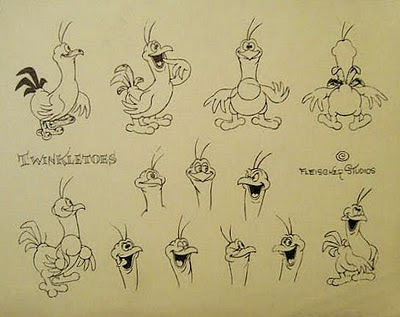 (click on image to enlarge)
The bear is a harder guess - only the hardcore fans will be able to ID the character. 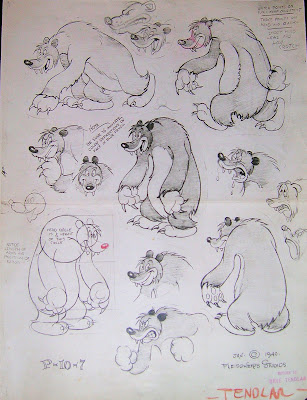 (click on image to enlarge)
OK - tired of guessing?? It's from the 1940 Popeye cartoon 'Olive's Boithday Presink'. (and later reused in the Animated Antic 'Zero the Hound') 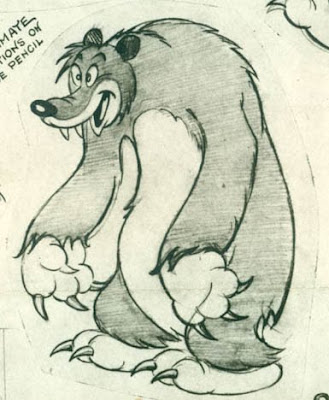 Note that Abbey took a pose right off of the model sheet.

I have seen other examples of 'borrowed' animation characters in the 40's and 50's funny animal comics. I suspect this sort of plagiarism flew under the legal radar, away from the eyes of studio lawyers. Or it could be that taking legal action was just too petty to pursue - no one really cared enough to do so.

Semi related to this topic is Thad's post - it has to do with story and concept. There's some really funny Jim Tyer animation in the cartoon he's highlighting.
Posted by Bob Jaques at 11:10 AM 3 comments: