Saul who, you say. Never heard of him?? Saul Kessler is another one of the many uncredited animators to work at the Fleischer Studio. I've known for years that a photo existed of him in a 1930 - 31 studio personnel group shot, but nothing else until recently. Flipping though the pages of Fleischer's Animated News I was able to cobble bits of information together, and in turn, make a conjecture about his work.

I'm assuming that Kessler was already an animator in 1931 based on the group photo (link below) where he was placed in forth row from the top and beside animator Nick Tafuri. And in a 1935 Animated News, Kessler is noted a being a member of the Johnson crew alongside animators Tex Hastings and Don Figlozzi. 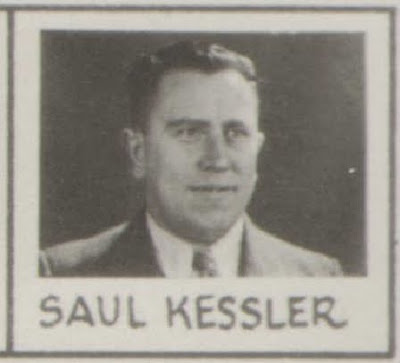 At some point Kessler may have been shifted into Seymour Kneitel's crew - possibly after Crandall left to head up his own crew. A Fleischer animation crew would average 6 animators - that number included the head animator/de facto director. Crandall's departure would have left a hole in Kneitel's crew - one that Kessler may have filled. My guess is based on similarities between the following gag drawing and frame grab. 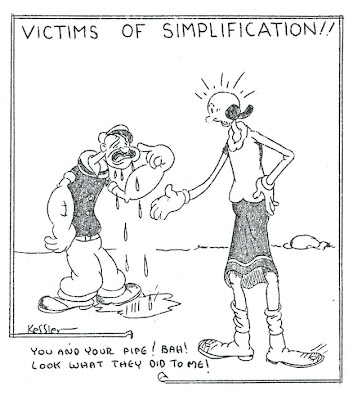 The above Popeye drawing is arguable in the style of Seymour Kneitel's 1936 cartoons - and leads me to believe Kessler may have been part of Kneitel's crew at the time of the drawing. Below is a frame grab with drawing similar to the one above. 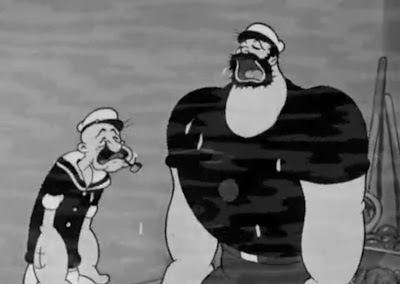 Update: Check out the comments for some links to Kessler's comic book work.
Posted by Bob Jaques at 5:15 AM 6 comments:

Having the position of head animator/de facto director allowed Dave Tendlar his pick of the choice scenes to animate. The following clip is an example of Tendlar's 'cherry picking' a scene of animation from 'Learn Polikeness'. (his style earmarks previously noted here and here) 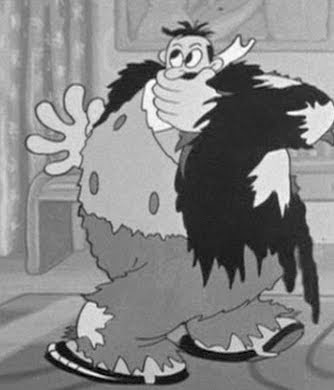 Note the shape of the fingers in Bluto's open hand - the 'bulb-shaped' look is another earmark typical of Tendlar's drawing style.