Occasionally Popeye animation related art comes up on Ebay - usually placed in the right category. I found the below gem a while back listed under 'Comics - Original Comic Art'. Clearly this piece has nothing to do with the newspaper comic strip and is drawn in the Fleischer Studio's animation style. I suspect it was generated either by the Fleischers or Paramount's publicity department. 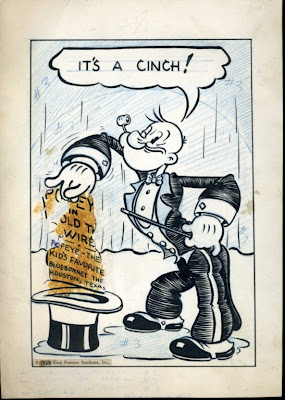 Click on image to enlarge
From personal observation (something I can't prove) the animation crews were responsible for much of the publicity art done for their shorts. For example - if you've seen the one sheet poster for Wotta Nitemare, the art looks to have been done by George Germanetti - one of the animators on that cartoon. The one sheet poster for 'I Likes Infinks and Babies' looks to be drawn by an animator working in Seymour Kneitel's crew. Likewise with other Popeye one sheet posters and the many publicity drawings of Popeye and cast that have been attributed to Willard Bowsky. So there would be no reason to believe that this drawing was not generated by a studio artist. It is clearly in the style of the Bowsky crew and if you look close, you can see the remaining letters for 'Hold the Wire' - one of Bowsky's Popeye cartoons that was released in 1936. The silhouette of the rubber cement stain looks to be in the shape of a cutout rabbit and was detached and lost at some point over the years. Had it not been detached the purpose and year of the art would have remained a mystery.

I've read that Hal Seeger did publicity art directly for Paramount early in his animation career. It's possible that this may be his handiwork.
Posted by Bob Jaques at 9:25 AM

The inking is gorgeous!

I'm unconvinced this is Popeye - not a single tear or hole in that suit.

"I'm unconvinced this is Popeye - not a single tear or hole in that suit."

That's because the lining of the suit is made of spinach.

Must remember to look for Wotta Nitemare poster to append to post...