And by that I don't mean that she lived in a log cabin, wore buckskin, a coonskin cap, and drew on pieces of birch bark to animate. Actually, I got the title from a small publication made for an ASIFA tribute (researched and written by Bill Lorenzo) to her work as one of the first women animators. (Lotte Reiniger predated her) She was the first woman animator, I believe, to work within the studio system.

Over at the GAC forum a topic was started a couple of days ago regarding woman animators and Ray Pointer noted that Edith Vernick predated Lillian Friedman as the first woman animator at the Fleischer Studio. Even though Vernick did some animation (in particular one scene in Fresh Vegetable Mystery released in 1939), she did not officially hold that position at the Fleischers so IMO it's safe to say that Friedman was the first. In a copy of Fleischer Animated News Vol.2, #8 (no date - from sometime in 1936. Let's Get Movin' had just been finished) there is a one page biography of Edith Vernick that states 'She has done most everything but animate. At present she is head of the Inbetweening Department.' You can draw your own conclusion based on that tidbit.

Back to Friedman - Unfortunately she only animated on one Popeye cartoon released in 1934 - 'Can You Take It'. (working/production title Bruiser Boys) 'Can You Take It' is her first professional known effort as an animator. Awesome stuff for her first outing!!

According to a gossip piece written in a February 1935 copy of Fleischer's Animated News, Lillian Friedman had a dog named Popeye. 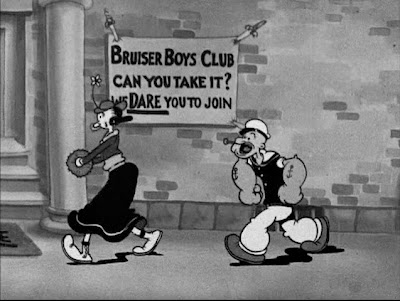 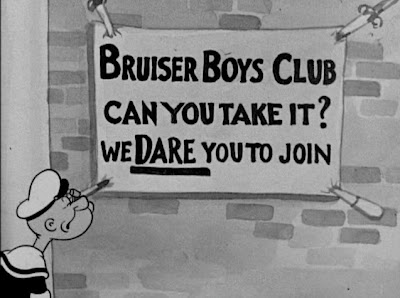 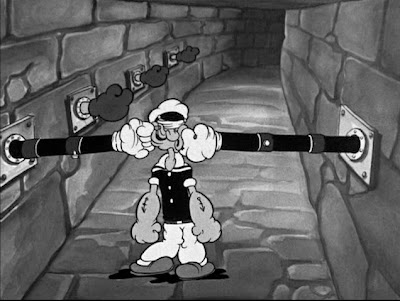 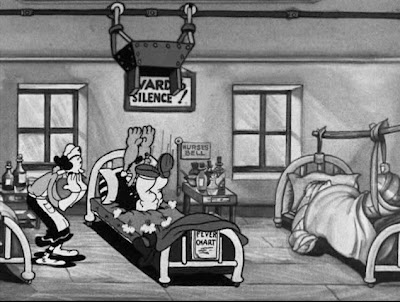 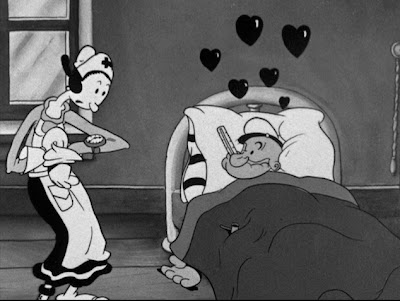 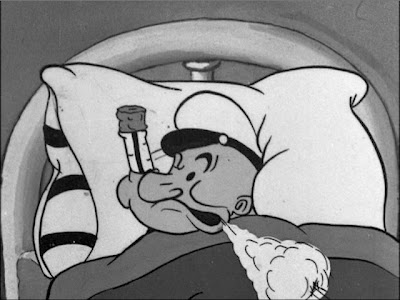 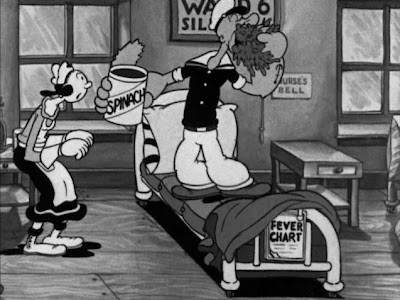 Next Animator ID - William Henning
Posted by Bob Jaques at 9:01 AM

Bob, this is great stuff. Thanks so much for sharing your treasure trove of Fleischer knowledge with us.

I just showed scene 1 of this cartoon last week to my students as an interesting walk. I never realized before that Popeye's theme is in waltz time. And I didn't remember that Lillian Friedman had animated the scene.

Note that she uses Popeye's head to hit the first accent in the 1-2-3 beat structure and then uses the feet to hit beats 2 and 3. So on one step, the head comes forward with the right foot and the next time it comes forward it's with the left foot. That's pretty sophisticated for a beginning animator.

Did she also animate the scene where Popeye exhales cigar smoke through his eye socket?

Sorry Jan - she did not animate that scene. I have posted frame grabs for all the scenes that she animated in 'Can You Take It'.

The real shame is that Myron Waldman's unit wasn't asked to do any other Popeye cartoons than that one. I did a little research into that when Mr. Waldman was marketing Popeye collector cels and was really shocked to make that discovery. I mean there were quite a few other ex-Popeye men still alive at the time who had much more than a passing association with the character and would have been a better fit.

Who else was in the Waldman unit? I think there was Nick Tafuri (who stayed with the Waldman unit in the Famous era), Ed Nolan, Graham Place, Hicks Lokey, Herman Cohen and a handful of others, but those (besides Friedman) were the most prominent. And I think Tom Johnson was there before he got his own unit later in the 30's (Dave Hoffman, Frank Endres, Harold Walker, Otto Feuer, etc.)

In "Can You Take It" - the only Waldman Popeye - I always liked that one scene where Popeye's face is distorted. Thanks, Lillian Friedman.

Well Dave, I guess you're in for a treat because Waldman did 2 other Popeye cartoons - Problem Pappy and Popeye Meets Rip Van Winkle.

Tafuri was a Famous Studio addition to Waldman's crew. Prior to that he had been a defacto director in the early 40's at Famous and a member of various Fleischer crews - animating primarly for Bowsky and Tendlar.

I'm sure there are some names that I may have missed but those were the regulars.

Yikes, Bob, I totally forgot about those two he did down in Florida. But I do know that Myron did zippo Popeye for Famous.

Hi! I run the (very new) blog: theanimatedcritique.blogspot.com and was doing some research on Lillian Friedman, who was not just the first woman animator for the Fleischers but the first woman commercial animator ever employeed by an animation company... she actually was rejected back in the day (late 1930s I believe) from Disney Studios because she was a woman. I added a link to your blog on my site, since it's so informative and interesting. I found it by chance looking up some information on Lillian to post in my blog! :)

Say, in scene 21, that wouldn't be a pipe hole where Popeye has his thermometer/cigar, would it? :)

As to Ray Pointer's assertion that Edith Vernick was the first woman animator at Fleischer's, that's true only if you consider an inbetweener as an "apprentice animator" (Disney's legal term for it as seen in Jack Kinney's first contract). Vernick, in my interview with her, did not mention her doing animation until after the 1937 strike, when she was kicked upstairs to become an assistant animator. Interestingly, Friedman remembered that Vernick might have had a tryout as an assistant in the early 30s, when the studio first tried out having assistants; she said Vernick did not work out because her draftsmanship was not up to par.