William Henning sure drew ugly. He animated some of the most unappealing and crude looking Popeye I've ever seen. But that said, this is an equal opportunity blog, so all Popeye animator styles that can be identified will be represented here.

Probably the second most prolific Popeye animator next to George Germanetti, Henning's work spanned 3 different periods of the character and can be found in Fleischer, Famous Studio and King Feature Popeye cartoons.

Part of the old guard at the Fleischer Studio, Henning was a senior member of the staff for approximately 7 years by the time Popeye started into production - 1 year longer than head animators Seymour Knietel and Willard Bowsky. Before becoming an animator in 1931, he was head of the inbetweening department.

A member of Seymour Knietel's unit for years, Henning animated on Popeye from 1933 until 1939, when at that time, he was briefly given the job of head animator (de facto director) on a couple of Popeye cartoons. His early Famous Studio years had him working for a short time in Jim Tyer's unit and later with Tom Johnson's unit. In between he did brief stints with Nick Tafuri and Bill Tytla. (whom I believe exercised more directorial control over his pictures than did Knietel and Sparber)

Henning was considered good at drawing and animating 4 legged animals and often given scenes of that kind according to animator John Gentilella.

Once Henning established his animation and drawing style it evolved marginally as compared with the advancement of his peers. Coming into the Famous Studio years, his style looks frozen in time - much of his later work looking like it still belonged in the Fleischer cartoons.

A gossip piece in an issue of the Fleischer Studio's news publication stated that Henning was decorated for his service as a captain in the German army prior to working in animation. I wonder if that sort of regimented military attitude affected his animation. 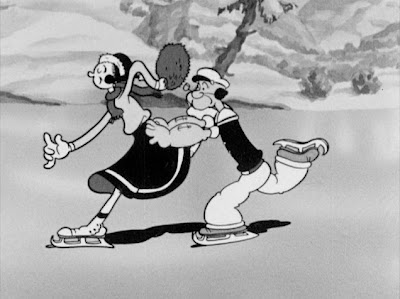 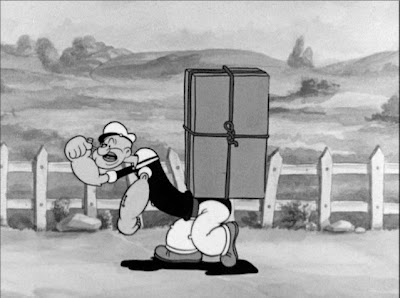 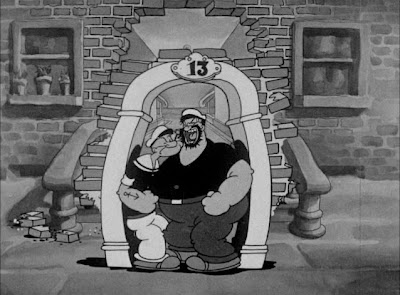 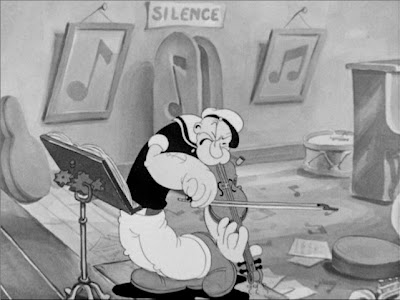 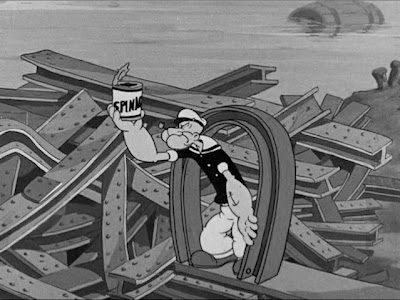 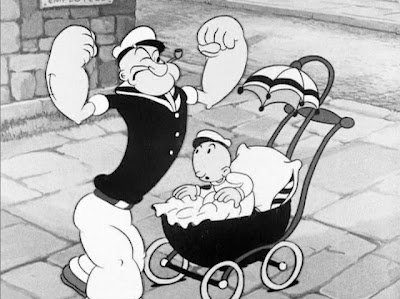 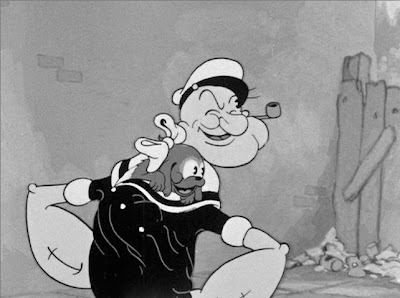 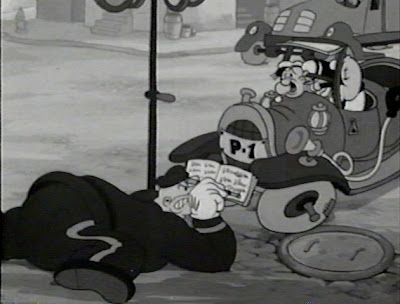 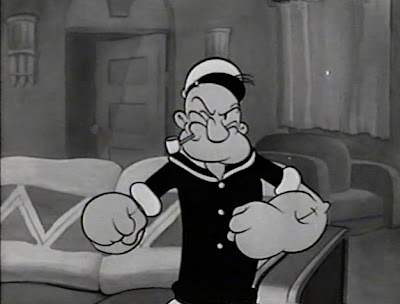 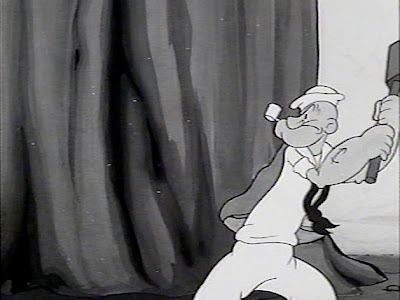 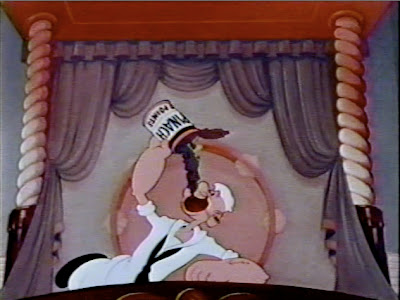 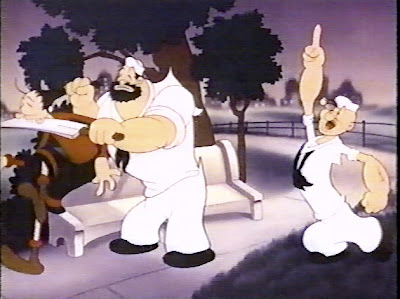 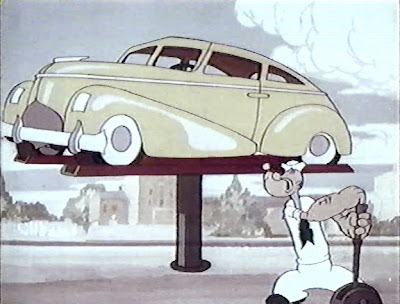 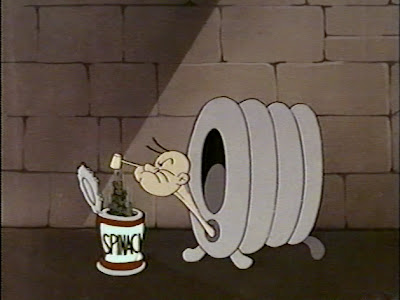 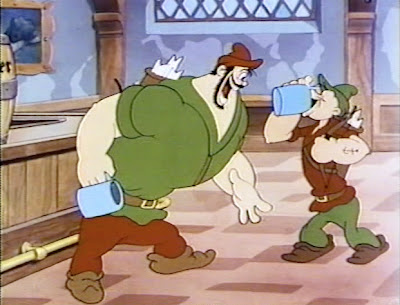 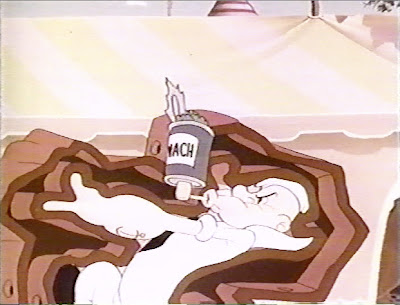 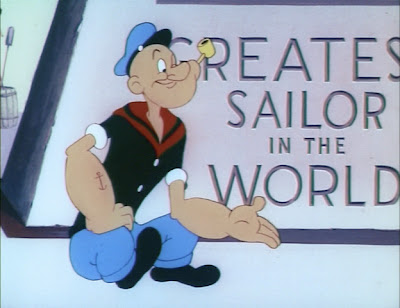 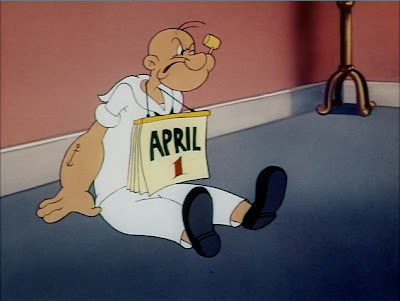 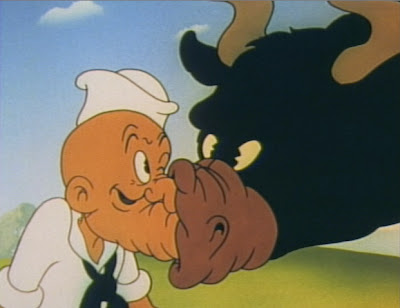 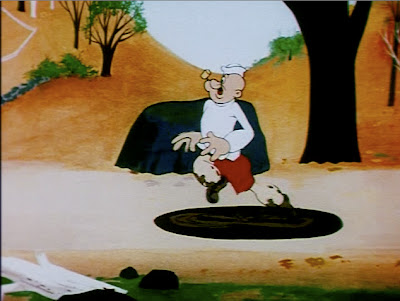 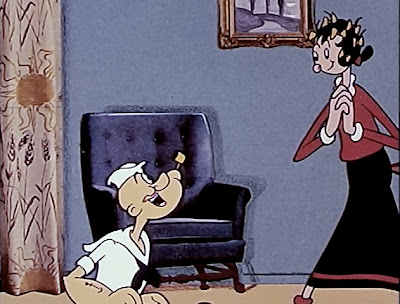 
Here are 2 examples of Henning's Popeye - 10 years apart with basically the same drawing style and expression: 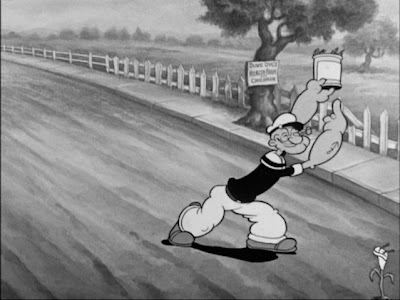 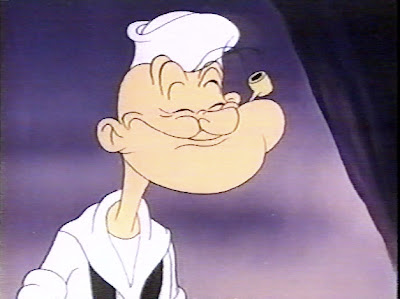 Next Animator ID - Charles Hastings (the 'off model' Popeye animator)
Posted by Bob Jaques at 9:10 AM

That is some ugly-ass drawing! For some reason I love the last Puppet Love frame though.

Yeah - it's a more 'charming' ugly than the rest of the examples.

The "Puppet Love" frame is some of the lovely and uglyness draws.

Or else, i love the one from Robin Hood-Winked. I'm not a Popeye great fan but it having good stuffs.

According to you Popeye fans, what is the #1 most ugly screengrab of Popeye? I'd say it was the close-up of his face when he's pretending to be an octopus in 'I Wanna Be A Lifeguard' (1936)! You can see this cartoon here: http://www.youtube.com/watch?v=AMkaqNGQH98 (the close-up begins at 5:44)

Wow Henning is great! I'm going to look for these scenes right away. That image from "Butler Up" is really bizarre - Popeye the Cyclops!

It looks like the background for Butler Up contains photographs of a chair, curtains and a picture frame, pasted onto a BG painting.

Puppet Love! That cartoon is the Henningest one around. Puppet Bluto had some serious facial wrinklin' ation goin' on.

It's Brewster. Drawing aside , there are some iconical Popeye moments there. For some reason I remember Bridge Ahoy and the scene where he turns the girder into a magnet really well . Drag scenes with Bluto ? I don't remember that and really , I don't remember them as ugly. What you see in motion and stills are two different things I think. Great blog Bob.