Fellow blogger and animation aficianado Mark Mayerson has been transcribing an interview done in the 1976 with Fleischer animator Gordon Sheehan. I haven't been able to crack Sheehan's animation style yet - there are few credits for him and none on Popeye cartoons, making it doubly hard to ID his animation. I do know from a published interview that he worked primarily for Willard Bowsky's crew.

Here's a quote I found on the web from an interview done by Leonard Kohl with Gordon Sheehan:

"Dave Fleischer was showing some visitors around the studio one day as I was drawing my pencil animation for this action. As was his habit, he would pick up some animator's drawings from someone in the group, and 'flip' them for his guests. This day, he picked up my scene of Popeye violently wiggling his posterior to extricate the can of spinach. After flipping my drawings, he seemed to get a little 'shookup,' and put my drawings back on my desk without comment. Later that day, Dave Tendlar, the director, told me, Dave told him that my scene was too violently 'suggestive' and that the action would have to be 'toned down' to avoid any promiscuous sexual implications. This was something that never entered my mind, but I did as I was told, and modified the 'offending' actions. At the time, the Will Hays censorship office had the pants scared off movie producers (even cartoon producers) regarding sexual promiscuity. The office carried plenty of 'clout' and could exert their authority sometimes at considerable expense to producers. Evidently, Dave Flesicher was well aware of this, in 'censoring' my animation."

I believe the cartoon he was talking about is Aladdin and His Wonderful Lamp. I speculate (because I don't know for sure) that the scenes below are those animated by Gordon Sheehan. Following are my reasons - see what you think. 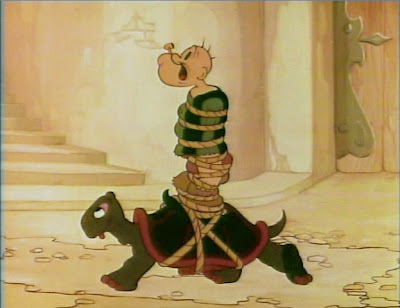 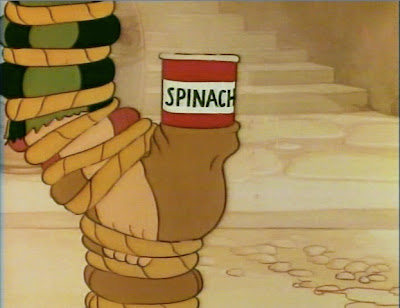 The wiggling posterior/spinach extricating action described in the quote above. 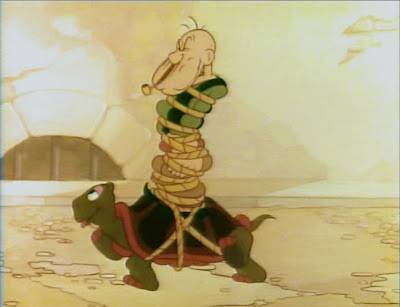 Another scene in the same drawing style as the first frame grab. The animation of Popeye chewing looks the same as chewing animation seen in other Bowsky directed Popeye cartoons. (see clip for action) 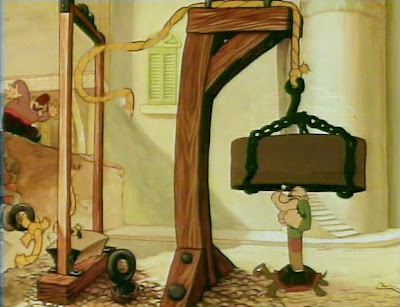 Same style of drawing and animation as the above frame grabs.

There you go. Anybody know for sure??
And don't forget to check out the interview on Mark's blog.
Posted by Bob Jaques at 8:55 AM